This monitor doesn’t go for looks, but rather stresses performance. A reasonably priced monitor that averages out in pretty much all of its aspects.

The first thing that stands out from the Asus PA248Q 24″ Widescreen IPS Monitor, out of the box, is its utilitarian and practical built and design. Everything about the Asus PA248Q, from the bulky and blocky looking stand and hard-lined edges right down to its matte black finish, screams functionality over fancy sleek designs that is perhaps more pleasing to the eye.

Personally, I like the industrial design of the Asus PA248Q that gives off an appearance more suitable for hardcore gaming and would not look out of place, or even be the center-piece, in your gaming man-cave. 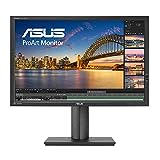 The Asus PA248Q boasts pivot, tilt, & swivel features with a 4-inch height adjustment, 25 degree tilt range, and a 60 degree swivel range which are all conveniently printed on the mounting arm itself. The Asus PA248Q is also able to be pivoted on its head for a portrait view. However, the Asus PA248Q does not have an auto-rotation feature which is surprising and rather short-sighted considering its prevalence in today’s smartphones and tablets but it is ultimately useless for gaming in any case.

The stand itself feels stable and not at all flimsy. A crude experiment consisting of my attempts to knock the Asus PA248Q over at its middle height setting reveals that the risks of accidentally toppling the monitor over are fairly low. No danger of knocking over the monitor whilst reaching for that bit of sustenance during a game marathon here.

Aligned along the left edge of the Asus PA248Q are four USB 3.0 downstream ports, with the usual host of HDMI, VGA, DVI and DisplayPort video inputs together with an upstream 3.0 USB port at the rear of the cabinet. There is also a headphone jack built directly into the monitor useful for going into stealth-mode at any given time. It is useful to note that the connections are faced down and would be awkward to access if not for the pivot feature of the Asus PA248Q.

On the right of the Asus PA248Q bezel are the buttons for the menu, input select, preset select, programmable hot keys 1 & 2, the power switch, and a navigation joystick which gives access to a QuickFit Virtual Scale Function with grid patterns and paper sizes more for paper and photo size preview/editing. Generally the buttons feel snappy enough for that satisfying click whenever pressed.

The Asus PA248Q features a 1,920 x 1,200 panel with a 16:10 ratio. It also has a non-reflective anti-glare coating that works quite well at minimizing reflections and pesky sunrays. The Asus PA248Q comes with the Standard, Theater, sRGB, and Scenery presets picture setting with two User customizable modes. The Color menu provides the usual brightness, contrast, saturation, hue, and color temperature settings with a 1.8 and 2.2 gamma setting. It should be noted that right out of the bat, the Asus PA248Q is factory calibrated with the brightness setting set too high. It is recommended that the first thing to do is to reduce the brightness setting to a more comfortable level.

The colors and display of the Asus PA248Q are undoubtedly beautiful. A gameplay test of Bioshock Infinite on the Asus PA248Q reveals that the colors produced and displayed are vibrant with the notable plus point of having wide viewing angles with hardly any noticeable color shifts. I personally like this particular feature as it allows flexible viewing angles, especially when multi-tasking, to keep your eyes on the action as well as for the added benefit of any spectators/audience in the room. Backlight bleeding is also kept to a minimum and only ever noticeable if playing in a room devoid of other light source. I have also not encountered any dead pixels in my testing of the Asus PA248Q and had no problems with any image ghosting during tests.

Playing on the Asus PA248Q for long hours is also not an issue as even after 3 solid hours of gaming, the monitor remains cool or merely warm to the touch. Apart from that, the 24 inch display works as intended in providing a large and spacious viewing surface for optimum immersion during gaming.

A negative point I would raise about the Asus PA248Q is that it did not have any built-in speakers. For this monitor to seem so fully designed around the idea of functionality and convenience, with the multiple 3.0 USB ports and headphone jack, the absence of built-in speakers is perplexing especially when the bulky design seem so perfect for one. The addition of the headphone jack does alleviate this problem to a certain extent but it would have been nice to have the option. The Asus PA248Q is also not exempted and prone to those snap, crackle and pop sounds that monitors give out after it has been switched off.

If there’s one other drawback I should mention within this Asus PA248Q review is that this gaming monitor has a rather considerable power consumption, specifically at approximately 75W. The average power consumption for gaming monitors would be only be at about 30-40W so on the whole it takes about twice the usual amount. Personally though, the degree of power consumption has never been an issue to me but I’m aware that there are others that would think otherwise.

In summary, the Asus PA248Q is not perfect, but the overall build quality, functionality and features more than make up for any of its short-comings. Moreover, the Asus PA248Q is reasonably priced and I would recommend this to anyone looking for a gaming monitor on a mid-range budget that is able to keep trucking through the night when everyone else has gone to bed.