The Asus PG278Q G-Sync monitor is an extremely impressive gaming monitor in terms of its performance, assuming you get a perfect version. From the reviews thus far since its inception, it seems that its quality control team has been struggling a little to keep up with the customers who want nothing short of a perfect monitor. Who can blame them though, when they’re forking out some $750 or so for it?

The ASUS PG278Q is one of the first, if not first, G-Sync monitors that was released specifically to take advantage of Nvidia’s new G-Sync technology. In theory, this feature will work wonders for plenty of gamers because it meant that screen tearing, stuttering and input lag were issues of the past.

The hopes and hype surrounding this particular gaming monitor were astoundingly high when ASUS announced the release of this particular monitor of theirs. Were they justified though? Well, sorta. Let’s start off with the positives of this monitor. 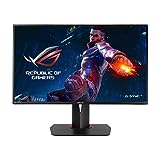 Firstly, the picture quality of the ASUS PG278Q is excellent for a TN panel. In fact, its display quality is only slightly sub-par compared to an IPS monitor. The contrast and colors are close enough that the average gamer might not likely notice the differences between an IPS and this monitor. The difference in the viewing angles, though, are significantly more apparent. Since this is essentially a 27″ gaming monitor though, the clarity and sharpness of the images displayed is incredible. 1440p gaming is really on a whole different level as compared to a 1080p display. While this will be taxing on your overall FPS, the amount of additional pixels being drawn also means that your AA settings need not be as high because the jagged lines will be less noticeable.

Also, the best thing about G-Sync is that V-Sync is no longer needed, which means that you no longer have to choose between suffering from input lag or screen tearing. This is huge especially for FPS games where the input lag incurred by having V-Sync turned on can be crippling.

Now, here comes the downsides. The price tag on this monitor is a hefty $800. That’s almost twice the price of an average 27″ IPS monitor, which is ridiculous. This, in addition to the graphical performance (i.e an upgrade in your graphics card) that will be needed to power up this monitor to its optimum level, means that you’ll be spending a ton of moolah to get the most out of it. Even with a dual GTX 760 setup, maxing Crysis 3 at 1440p only got me a constant 45-50 FPS, so if you have anything less than that, you might want to consider upgrading your graphics card before getting a 1440p monitor.

If money is not an issue to you though, you’ll still have to get lucky with your purchase. There seems to be an unprecedented amount of online reviews regarding broken pixels when it comes to this monitor. With the amount of pixels that comes with this monitor, you might argue that 1-2 dead pixels should be expected and while I would normally agree with you, the premium you’re paying for a $800 monitor nullifies this notion in its entirety. Some people have reported having up to 3 dead pixels on their monitors, which is simply unacceptable.

Additionally, reports of backlight flickers from time to time have also surfaced after weeks or months of usage. It seems evident that the quality control for ASUS (at least for this particular monitor) has been rather abysmal as of late. If you’re looking to purchase an ASUS ROG Swift PG278Q, you really should be ready to either accept a couple of broken pixels as the norm or keep returning it until you get a perfect or close to perfect version of the monitor.