The VS239H-P is an entry-level IPS monitor that’s very affordably priced. Compared to the top 24″ IPS monitor (Dell’s U2412M), this monitor lags slightly behind the Dell in terms of its response time but has somewhat negligible differences (though still inferior) in terms of the image quality.

Physically, the Asus VS239H-P’s LED backlighting helps keep everything slim with the LCD monitor frame measuring a wiry 1.8cm. Thinness seems to be the active design choice here further underscored by the lack of an external power brick. Further, there are no visibly protruding buttons as the tactile buttons (as opposed to touch controls) are hidden under the frame. And we all know that there is nothing like the feel of actual buttons when it comes down to tweaking the various settings.

While aesthetically pleasing and having an Apple-like visual appeal, the sleek all-black glossy plastic frame and circular base stand also mean that it is a magnet for finger prints and general smudges. Further, with nice-looking stands such as this, the trade-off is that it is not the most stable stand around and is particularly prone to wobbling. While the monitor looks great from the front, any views from the side will reveal the ugly cable connections that face outwards as the connection ports are plugged-in perpendicular to the back panel. I found this design strange and ultimately counter-productive to having a thin sleek monitor which I would want to show off without the mess of cables behind it. 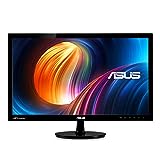 The physical set up of the Asus VS239H-P is also very limited as it was not designed with any mounting arm or any other such adjustable mechanism. The screen itself can only be tilted -5 to 20 degrees forwards and backwards with no options for height adjustments. Therefore monitor is always going to be about 7cm from the standing surface. Also, you cannot swivel or pivot the screen. Having become used to the flexibility of modern monitors, I found this rigidity very restrictive and a deal-breaker to those who love to tinker and tweak every little bit of their hardware. All those who game or watch movies for long hours on their monitor will know that feeling when perfect sitting posture won’t cut it and would like to sit in all manners of positions while maintaining a good view of the screen. The limited ergonomics of this monitor is a clear black mark in my book.

Whilst the ergonomics of the Asus VS239H-P is fairly set in stone, there are some redeeming features that keep it afloat. Features such as the wide viewing angles that are afforded by the sweet IPS panel that boasts approximately 178° of vertical/horizontal viewing. There is a further Smart View function but as it essentially only makes the already bright screen, brighter, which in-turn causes diminishing colors of the blacks to dark grey, I would personally not recommend it and would keep it switched off.

The Asus VS239H-P have six video presets, including an sRGB and QuickFit mode, which allows for more efficient editing with real size on-screen guidelines for varying documents and photo sizes. As with the Asus 298HQ, this feature is more useful to those who use their rigs for more than just gaming. Nevertheless, having it as a feature may be useful somewhere down the road if you’re into editing your screencaps of achievements or anything like that.

The positive point to the credit of the Asus VS239H-P is that the display menu is very user-friendly with navigations made easy by the aforementioned tactile buttons. The 5 settings grouped on the left are Splendid, Color, Image, Input Select and System Setup. “Splendid” is the Asus lingo for their video presets which consists of Scenery, Standard, Theater, Game, Night View, and sRGB.

The Color groupm as its name suggests, is where users adjust the settings of the brightness, contrast, saturation, color temperature, and skin tone. Note that if using some of the “Splendid” presets, some of the settings may be locked-in and grayed out from further adjustments. For the Standard preset, the saturation and skin tone settings cannot be adjusted as the color temperature is by default set to User Mode (R, G, B gains at 100%). Users have the options to change to Cool, Normal, and Warm. Skin tone setting will also depend on the “Splendid” video preset with 3 presets namely Reddish, Natural, and Yellowish. Theater mode lowers the brightness with an added kick to the colors that is fittingly perfect for movie-watching.

The image group controls settings such as the sharpness, aspect ratio control (only changeable with HDMI connection), Trace free and ASCR. I would like to highlight the Trace Free feature which allows adjustments to better the response times and pixel latency, which would have a direct impact as to the quality of the gaming experience on the Asus VS239H-P. There are six settings beginning at 0 with increments by 20 to the maximum of 100 (set to 60 by default) with higher settings providing higher levels of response time compensation. Testing revealed that the default Trace Free level of 60 is best at producing the least amount of ghosting artifacts. The ASCR mode is short for the Asus Smart Contrast Ratio for dynamic contrast ratio, boasting a ratio of 50,000,000:1. Disappointingly, I found that this mode did not provide any worthwhile boost to the visual quality, and accordingly had it turned off for almost all of my testing.

There’s no surprise hidden in the final two menus, which are Input Select and System Setup respectively. It is worth noting that if you’re keen to save some energy, there is the Eco mode in the System Setup for those with an environmental conscience.

Going back to the image/visual quality of the VS239H-P, the IPS panel is capable of producing 16.7 million colors, with a maximum luminance of about 270cd/m2 at 100% brightness, while black luminance came up to 0.45cd/m2. Testing of the gamma concluded at 2.20 (note that there are no gamma presets available in the display menu) and color temperature was recorded at 6,500K across the board in all video pre-set modes, except the sRGB where it clocked in around 7,400K with a cooler white luminance of 150cd/m2. The 3 additional color temperature presets (Cool, Normal, Warm mentioned earlier) have values of about 13,400K, 9,400K, and 7,500K respectively.

The original factory brightness settings were too bright for my preference which also resulted in a further issue of graininess on screen. I found that the optimum settings were closer to approximately 120cd/m2, that is achieved by reducing brightness to somewhere between 30% – 40%.

Power consumption during use recorded at about 34W at the factory setting. Activating Eco mode reduced it to 22W and testing with the preferred settings mentioned above brought the power consumption figures down to 21W.

As mentioned earlier, the Asus VS239H-P has a response time of 5ms (gray to gray), 14ms typical, which curbs ghosting issues. This is further helped by storied Trace-Free feature. I conclude that this monitor is generally suitable for the average-joe’s everyday gaming needs but perhaps not completely sufficient for professional hardcore gamers who especially take their FPS seriously. I personally did not come across any dead pixels and the Asus VS239H-P comes with a nice 3 year warranty.

A small note on the Asus VS239H-P is that the screen has a matte/anti-glare coating on the display that helps in preventing reflections from outside light sources on the display. Closer inspection of the coating may initially draw concern due to its rainbow/oily looking properties but once viewed from a regular distance (20 inches) it is not noticeable and easily ignored. Just don’t go looking too intently in search of it.

The Asus VS239H-P panel has a pixel pitch of 0.2655mm, typical of a 1920×1080, 23-inch monitors. The discrepancies in the screen space due to the reduced height does not affect the HD displays as it fits without any black bars at the top and bottom of the screen.

In conclusion, the features of the Asus VS239H-P are outstanding and indeed some features do reflect well on use but the contradicting design choices and some inconsequential features hold the monitor back from soaring to its highest potential. Ultimately, the Asus VS239H-P doesn’t offer the best design or flexibility, but it is certainly able to hold its own when it comes to pure performance.