The BenQ RL2455HM used to be a top choice for competitive gamers, but ever since the newer 120 and 144 Hz monitors are out, its popularity died down a little. If you’re not a competitive gamer however, this would still be an excellent choice.

The RL2455HM monitor by BenQ was featured in a couple of gaming competitions such as MLG (Major League Gaming). If you’re into Dota 2 or other similar games that many competitions are solely based upon, you’ll often get to see these gaming monitors being used by the professional gamers themselves. This monitor is an excellent choice for gamers simply because it focuses a whole lot on ensuring that the fastest response time can be provided. This will be particularly important for FPS gamers because of the significant advantages that they can derive from having a lower response time compared to their competitors.

Because there’s only so much you can do with getting your ping as low as possible (the rest is really geographically related) or tuning your hardware to achieve the maximum amount of frames per second, the one major element that many gamers seemed to have overlooked would be the gaming monitor itself. For instance, if you’re currently playing on a rig that could support over 60 FPS in your games, you’ll essentially be limiting its capabilities by playing on a 60 Hz monitor. With that said though, the RL2455HM can only support up to 60 Hz of refresh rates, but for its price ($180), it’s easily the ideal TN paneled monitor for gamers. If you’re willing to spend an additional $100 for a bump to a 144 Hz monitor, you would do well with the Asus VG248QE. 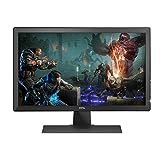 Today, many monitors can easily handle up to 120 Hz of refresh rates. This essentially means that your FPS can be doubled and the transition of images on the display will be twice as smooth. How much difference does this make? Honestly, there aren’t any better way to learn of the differences than to place two monitors with 60 Hz and 120 Hz of refresh rates side by side. If this is proving to be difficult for you, simply go onto any gaming forums and a ton of 120 Hz monitor users will be singing high praises of this particular feature.

Let me tell you, the difference will be amazing and after using a 120 Hz monitor, going back to a 60 Hz monitor will be like switching from 60 FPS on your games to capping it to a mere 30 FPS. If you own a gaming console like an Xbox or a PS3, the maximum FPS that the consoles are able to display will only be 30. Play the exact same game on the PC to get a maximum 60 FPS and the differences are huge, right? Now, double that even further and that’s what you will get out of 120 FPS.

If you have a limited budget of $200, then yes, this is essentially the best choice for you in terms of the quality and response time but as mentioned earlier, if you can afford to fork out an extra $100, you can get an upgrade in the refresh rates by investing in the VG248QE instead.

Otherwise, BenQ’s RL2455HM is a monitor that can hold its ground against its toughest competitors like Dell’s gaming monitor series or even Samsung’s. How so? Firstly, BenQ knows what most gamers need and they go all out to give them those features. For instance, because cost will always be an issue for everyone, they’ll have trimmed down all the unnecessary input ports, connections or features like inbuilt speakers that many other monitors have. HDMI ports for instance are almost always provided in every one of BenQ’s gaming monitors because you can easily plug them to your other gaming consoles besides your PC.

In terms of the materials used to construct the monitor, it has a matte finish on the majority of its surface, with the exception being the stand, which has a glossy surface to it. On the whole, the monitor’s designs are excellent, its features are sufficient and its specifications are certainly off the charts, as can be expected of any monitors made by BenQ.