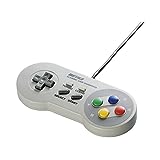 It’s not perfect, but it’s as close as you’re gonna get for under twenty bucks. If you’re happy playing an SNES emulator with your SteelSeries Nimbus, that’s fine. But for many of the more nostalgic classic gamers, it’s just not the same without the right gamepad, and BUFFALO has done a fine job of recreating the classic look and feel of the original SNES controller.

If you grew up in the 80’s or 90’s, you remember drooling over video game magazines and wondering how you were gonna save up the fifty or sixty dollars to buy Sonic 2 or Yoshi’s Island. Most of us had limited gaming libraries. If you had more than a dozen games on the shelf, you were basically rich. We had our ways of working around this. We could spend our allowance at Blockbuster, trade old games with friends or borrow their copy of Final Fantasy 6 and be very careful not to save over their file. But the vast majority of games, you just had to accept that you probably wouldn’t get a chance to play them. We couldn’t wait for the Steam Summer sale and pick up a sixty dollar release for five bucks.

So when emulation became a viable option, we were finally able to play all those games without having to spend every last dollar of our Christmas money on them. The Virtual Console is great, the SNES Classic is awesome, we’re happy to pay for these games now that we’re adults with jobs and you can pick up a couple dozen of them in a single package, but a lot of the classics are left out. Nintendo focuses primarily on first party games in their re-releases, and in many instances it’s hard to know who holds the rights to games developed by long-defunct developers like Data East. So emulation remains a viable option for many classic gamers.

The problem with this: The controller is everything.

Playing classic console games on a keyboard just doesn’t feel right, and the Xbox 360-style controllers just don’t sit very well in your hands. So if you’re a classic gamer, then yes, you do need a classic controller. The question is whether BUFFALO’s classic USB gamepad is the one to invest in.

Here’s the important thing: It feels almost exactly like a real Super Nintendo controller. The only major difference when you hold the controller in your hands is the X and Y buttons. If you remember how the classic SNES gamepad felt, the A and B buttons had a rounded M&M type feel to them, while the X and Y were concave, like Smarties, the candy that came in those little cellophane-wrapped stacks that you would usually throw away every Halloween. If we’re being honest, that’s an improvement. The sharper edges of those buttons weren’t always comfortable to rest your thumbs on, but all the same, this may be a disappointment if you’re looking for a perfect nostalgic recreation of your favorite childhood console.

Everything else about the Buffalo Classic USB gamepad is just about spot-on. The weight is close-enough. If you really need that extra half ounce, you can tape a nickel to the back. Not perfect, but close enough. The D-pad is the correct size and the rounded edges feel perfect in your palms. Plug your PC into the TV, sit on the floor and you’ll swear you’re back in 1992 playing Super Mario World for the first time.

If you want something for more modern games, the Steam controller is probably about as good as it gets. But when it comes to retro, you want the old-school equipment to complete the experience.