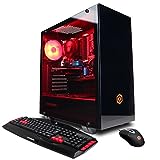 Though the Gamer Ultra GUA882 is packaged as a gaming PC, a closer look at its hardware reveals that it doesn’t quite match up to the specs of a serious gaming computer. However, a lot of people seem to be okay with its performance. You can definitely get a better gaming PC if you are willing to dig deeper into your pocket.

If you are an entry level gamer, the GUA882 will deliver. You may have to upgrade some features as you advance, and there’s a lot of room for that, thankfully. Overall, it’s a decent, good-looking PC and it delivers.

CyberPowerPC is one of the most popular PC retailers and manufacturers in the United States. CyberPowerPC specializes in custom PC builds and computer gaming and is mostly known for producing low-cost, high-performance devices. Today, we will be reviewing another entry-level prebuilt gaming PC, the Gamer Ultra GUA882 Desktop Gaming PC from CyberPowerPC.

It’s not easy to tell whether something is good or not just by looking at it – you have to try it yourself or at least talk to someone who has used it before. If you are new to computer hardware, or this is your first time buying a prebuilt gaming PC, you may not be able to tell whether the Ultra GUA882 is good for you from the face value. We hope this detailed review can help you figure that out.

The CyberPowerPC Gamer Ultra GUA882 is a full budget gaming PC package designed to provide the ultimate gaming experience for a user. This PC has been praised for its attractive price, a large amount of storage, powerful quadcore AMD, and a great looking case. The computer doesn’t have Wi-Fi, something that seems to bother a lot of users and its Radeon graphics card is not designed for hardcore gaming.

Well, some of these issues can be fixed easily, and if you really think that that the Gamer Ultra GUA882 is the right gaming PC for you or if you are on a very tight budget, none of these issues should stop you. You can easily purchase and install Wi-Fi adapters on a PC — goes for about $20 and as for the graphics card, you can replace it at a later stage if you need to improve your graphics. Here are some of the key features of the Gamer Ultra GUA882:

The Gamer Ultra GUA882’s case is its biggest selling point; CyberPowerPC did an incredible job in that department. On the front side of the case, you will find an RGB color-changing light that alternates between seven colors (red, purple, yellow, green, blue, orange, and white). On the right side, you will find the CyberPowerPC logo. There is a button on the front panel that you can use to change the RGB lighting schemes to your preferred options.

Inside the case, three LED case fans produce a blue light which combines with the RGB to give an awesome lighting effect. The case fans light stays blue though, you can’t change it. But other than that, the fans do a pretty good job at cooling the components of the case, so overheating is not an issue. It’s easy to run or install games from a disc if you need to, and the GUA882 comes with a DVD optical drive.

This PC comes with a total of 8 GB DDR3 RAM, which satisfactory for most games at least. You may not be able to upgrade the PC’s RAM to DDR4 with the computer’s processor/motherboard combination; it’s a little older version. Other than that, no issues here. The RAM configurations that you will get with this build are not specified. Typically, there are two sticks of 4GB RAM each, totaling to 8GB.

The PC comes with four RAM slots, but you only get two sticks of RAM, meaning that there are two more slots to expand should you decide to increase your PC’s RAM in the future. The CyberPowerPC Gamer Ultra GUA882 comes with a 7200RPM hard drive and a total of 1 Terabyte storage space.  The 7200RPM is a relatively standard hard drive that works well on the GUA882.

The AMD FX-4300 processor on the GUA882 is pretty old; it was released in 2012. Keep that in mind. It’s a quadcore processor is clocked at 3.8GHz, which puts up quite a decent performance in overall. The GUA882 processor comes with Turbo Boost technology, and when required, it can boost the processor’s speed to up to 4.0GHz. You might want to consider upgrading the processor, especially if you will be playing new games.

When it comes to graphics, the GUA882 is also a little disappointing. It comes installed with a 2GB AMD R7 240 graphics card which was released in 2013, so you will still be using older technology. With this type of graphics card, you will have to settle for moderate game resolution settings, probably not exceeding 720p. New game titles are launching with large resolutions which will be a little too demanding for the AMD R7 graphics card.