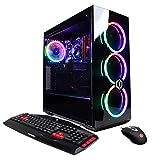 I would definitely recommend purchasing the CyperPower Gamer Xtreme gaming desktop. It is highly affordable and yet still has many great features despite its price. The 1024 GB hard drive in addition to the 802.11 ac Wi-Fi are excellent features that are often not found on comparable gaming desktops in the same price range. The free lifetime tech support provides an additional layer of security, allowing you to use your gaming desktop without worrying about needing help for any technical issues you might encounter with this gaming desktop. However, it is important to note that this gaming desktop does have some flaws. The keyboard and mouse are not the highest quality and some users have encountered a problem with the power supply. In my opinion, these flaws are excusable considering the affordable price tag.

The first notable feature of the CyberPOWERPC Gamer Xtreme GXIVR8020A4 Desktop Gaming PC is its processing system. The Game Xtreme Desktop has an Intel Core i5-7400 3.0GHz processor, making it a reasonably powerful gaming computer. This desktop also includes an Intel B250 Express Chipset, further increasing the processing power that will be available to you. Its eight gigabyte DDR4 memory module includes plenty of space which should allow you to play all your favorite games on high graphic settings. This desktop possesses a one terabyte DDR4 and a 1024 GB mechanical hard drive so that your variety of available games is also excellent. As with most modern gaming PCs, it includes the Windows 10 64-bit operating system.

The graphics are impressive for the price, as well. The CyperPOWER PC Game Xtreme has a AMD Radeon RX 580 four gigabyte video card. This video card is excellent and will allow you to run your games on high or even ultra settings for some games. The stress on the video card from putting a game on ultra settings varies from game to game, but this video card will likely handle that stress very well. With this, you can enjoy your games in pristine quality. The PC also has one HDMI port and one display port for maximum convenience.

In terms of connectivity, the first feature of note is the six USB 3.1 cables which are included with the PC. These cables are top of the line and one major improvement is an increase for the data transfer bandwith. This bandwith can now reach speeds of ten gigabits every second with this new generation of USB cables. Two USB 2.0 cables are also included which can transfer data at a maximum of 480 megabits every second. One RJ-45 Ethernet 10/100/1000 cable also comes with the purchase of the gaming desktop.

Additiontally, there are more features related to the desktop PC’s connectivity capabilities. It has 802.11 ac Wi-Fi and this allows the PC to operate at speeds which can vary between 433 megabits per second and two or three gigabits every second. The 802.11 ac Wi-Fi is another major improvement on the earlier 802.11n Wi-Fi and operates at much faster speeds. In order to maintain that level of speed, the 802.11 ac Wi-Fi operates only in the 5GHz band and requires a substantial amount of bandwith (between 80 to 160MHz). The 802.11 ac also uses spatial streams, requiring up to a maximum of eight at a time.

A keyboard and mouse are also included with the CyberPOWERPC Gamer Xtreme gaming desktop. However, in comparison to the many quality features of this gaming computer, the keyboard and mouse are not the highest quality items available. While both function normally, the mouse is not exceptional in its responsiveness or sensitivity. In a related fashion, the keyboard does not really stand out very much compared to other keyboards included with similarly priced gaming desktops. This may prove an obstacle for some potential owners.

The CyberPOWERPC desktop gaming PC is covered by a one year parts and labor warranty. This warranty ensures that you will receive replacements for any defective parts and you can request any repairs for free while you are covered under the one year warranty. I like this warranty because it is always reassuring to know that you can receive setup assistance or replacement parts for free for an entire year after buying a new gaming PC. Free lifetime tech support is another related feature which will prove useful to even the most technically savvy PC gamers.