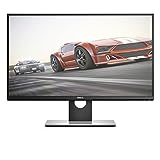 The Dell Gaming S2716DGR Monitor with G-SYNC has been well designed, is good looking, and comes with many features that are expected of gaming panels. The 2560 x 1440 resolution and Gsync combine to help the games appear sharp and smooth. The monitor is easy to manage, setup offers plenty of movement options, and comes with many ports.

Its image quality is also decent. It is able to achieve reasonable accuracy and sufficient contrast regardless of the situation. Its viewing angles and uniformity are great, though the viewing angles do suffer a little. In addition, it has an impressively low input lag. Even though this Dell monitor does not suffer any big issues, its competitors are seen to be less problematic.

The Dell Gaming S2716DGR Monitor with G-SYNC delivers an impressive benchmark outcome in conjunction with its input lag and uniformity. It provides good, and impressive features as well. This is together with the NVIDIA G-Sync and the 1440p resolution that leads the way. Although it does not have many issues, it still falls behind some of its rivals such as the Asus MG2279Q that is seen to be much stronger.

Gaming monitor developers have been experimenting with different monitor specifications for a few years now. But if the Dell Gaming S2716DGR LED-Lit Monitor 27.0″ Screen with G-SYNC is anything to go by, it appears as though the big brands have started settling into a more permanent rhythm. This is because the 1440p panels with AMD FreeSync or G-Sync have begun to dominate the monitor markets. In the past, Dell never produced many gaming panels, but the S2716DG is seen as a big play in this ever-changing field.

A TN screen has been deployed by Dell for this particular monitor. All panels that have been manufactured using this particular technology have excelled when it comes to their response times. Keep in mind that response time is a critical factor necessary for an intense gaming task. Nevertheless, this technology also has its downsides. The TN screens have been seen to at times suffer from poor viewing angles and accuracy.

In addition, the Dell Gaming S2716DGR Monitor with G-SYNC’s resolution of 2560 x 1440 is seen by many to be apt. This particular monitor has a density of 108.8ppi which lends it more sharpness that is not present in other 1080p panels. This basically means that your games will be more detailed and much clearer.

Its screen has been coated with an anti-glare layer. The layer does a perfect job of blocking all harmful reflections. Additionally, the anti-glare layer is not grainy. For this monitor, the primary gaming feature it has is the Nvidia G-Sync.

It has been designed to do away with graphical and tearing issues that often occur when the frame rate in a graphics card is not able to sync up with the monitor’s refresh rate. Nvidia is able to handle this issue by matching the graphics refresh rate with that of the monitor. Even though many older screens have been limited to 60Hz, the Dell Gaming S2716DGR Monitor with G-SYNC is able to run at 144Hz.

It works efficiently. The increase in its refresh rate and the fact that the graphics card and the monitors have been matched means that the games will appear much smoother. At the moment, it is vital to have the NVIDIA GPU if you are using the G-Sync. The monitor has great features, but there are areas where it has missed out, such as the absence of a card reader and speakers. Additionally, the screen modes that often litter other panels are missing in this Dell monitor.

Dell has constantly been seen as a great gaming brand, but many gamers have found the factory settings to be a bit underwhelming. Its black and brightness levels of 0.32 nits and 303 nits are okay, as they combine with a 947.1 contrast ratio, which is, by all means, a reasonable result.

At its factory settings, its 7,255K color temperature is deemed to be a little cool. But it is warmer when compared to other screens currently in the market. This monitor achieves mixed results as it at times renders the dark areas with an appropriate depth, while other sections are provided with just the right punch. It provides decent gamut coverage and color accuracy.

The Dell Gaming S2716DGR Monitor with G-SYNC’s performance is way beyond perfect. This is a monitor that has featured the Nvidia Gsync technology, a technology known to provide sharp and undistorted moving images that are accompanied by high-speed refresh rates. The technology assists in decreasing the motion blur while at the same time being able to deliver bright, jitter-free images.

Apart from this, it also boasts of having an input lag of 1ms panel response rate. This means that the gamer is able to enjoy an incredible and highly responsive gameplay. Additionally, it has been equipped with clear 2560 x 1440 QHD resolution, which helps it deliver 2 times more details as compared to the regular Full HD monitor.

A gamer can also adjust the monitor in any direction, be it vertically or horizontally. It can be adjusted to different heights depending on the user preferences. You can also swivel, tilt, or pivot it to find the right viewing position. This makes it easier to play games for a longer duration.