Powerful. The biggest pro for the Inspiron is just how powerful it is for the price. It outperforms many of the plug-and-play gaming laptops on the market right now, and it stands easily among the best-in-class for the $600-$800 range. Something like the Acer Predator 17 is a little more high-settings-capable right out of the box, but we’re talking about a laptop that’s less than seven hundred dollars for one that costs about two grand. The Predator is nearly three times the price without actually being three times as powerful.

Graphics. If you want to go a couple hundred dollars cheaper, something like the  ASUS P-Series will run you about five hundred dollars but it’s not going to be running GTAV at high graphics setting.

Value. This is to say that the 2017 Inspiron is neither the cheapest gaming laptop out there, nor is it the most powerful. But, it easily stands somewhere among the top ten when it comes to bang-for-buck. It’s more powerful than many laptops you’ll find for over a thousand dollars. The machine was built without a lot of the bells and whistles you find on laptops specifically marketed at gamers. There’s none of that Halo-helmet styled cheap plastic shell casing, no exposed speakers or anything. It doesn’t look any different from the laptop you use for work, it just runs better when you want to load up Watch Dogs 2. 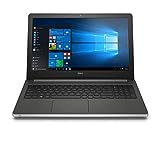 Layout. Most of the points we want to add to the “Cons” list come down to the physical build of the laptop. The first of these, and the one that will tend to be most annoying, is the layout of the keyboard and touchpad. You’re going to wind up accidentally clicking the mouse pretty frequently while hitting the spacebar. This means that it’s not the best laptop for travel. It’s more of an around-the-house computer that you’ll want to plug a laptop and a mouse into for gaming.

Design. Secondly, the power cord can get very hot after extensive use, so it’s not a laptop you want to put on your lap. You’ll want to keep it in a well-ventilated spot, around the center of your desk, not tucked up against the wall. On the plus-side, the display is pristine and roomy at 15.6 inches and the backlit keyboard is a nice touch, but overall the physical product comes up wanting in comparison to the potent interior.

The one thing that’s really a turn off with this machine is the overheating. If you don’t keep an eye on that, it’s easy to burn this thing out in less than a year. You can either limit the time you spend playing to an hour at a time, or you can take our advice and invest in a cooling pad. You can find plenty of them on Amazon in the $15-$25 range. We like the Kootek five-fan model. It does a great job of keeping your laptop cool, and runs surprisingly quietly under your computer. Once you’ve managed the overheating problem, this is just about the best laptop gaming experience you’re going to get for under seven hundred dollars. Just make sure to invest in a mouse and keyboard.

Too many “gaming laptops” are basically mid-range workstations outfitted with a few backlights and a tacky sci-fi casing. They come loaded with bloatware and they cost twice what they’re worth. This may not describe all gaming laptops, but it describes enough of them that more and more gamers are losing interest in the marketing gimmicks and just going right to regular ol’ everyday laptops for their gaming needs.

For its price point, performance and versatility, the 2017 Dell Inspiron has proven a popular choice among gamers looking for an affordable, straightforward all-around laptop that can handle gaming. A lot has changed over the last few years. Where you once needed a dedicated machine to run the newest games, now you can generally run anything on a pretty standard computer. You might not be able to run it at the highest settings, and you’ll have some issues with games that are poorly optimized, but generally speaking, a new laptop in the $400+ price range can probably run whatever it is that you want to run. A dedicated gaming machine is great and all, but you can generally save some money and build a more powerful computer by buying a mid-range computer and upgrading it yourself. The Inspiron is the best of both worlds. Not quite a dedicated gaming machine, but inclined towards gaming.

So, how does the new Inspiron hold up for gamers? Here’s what you need to know: The laptop is built around a sixth generation Intel i5 Dual-Core with eight gigs of DDR3L memory. This is a solid foundation for graphics-intensive tasks from gaming to video editing. If you want to make any upgrades to the laptop right out of the box, another eight gigs of memory should let you run most games at top settings without much in the way of frameskip. The Intel 520 graphics processor is built in, so upgrading it in a few years isn’t really an option, but we’re looking at another console generation before this thing gets out of date, so that shouldn’t be a concern.

So who is this laptop for? It’s a pretty good all-around laptop, so it’s hard to imagine someone who would be disappointed with the purchase, but it’s easy to imagine that there are a few groups we could identify as the target demographic for this computer:

The Inspironisn’t perfect, but it’s hard to be disappointed with the purchase. Just about anyone in need of a laptop, who doesn’t want to spend over a thousand bucks on the computer, will get what they’re after from the Inspiron. It’s not fancy, it’s not that impressive to look at, it’s just a laptop. But it’s one of the best laptops you’re going to find for less than seven hundred bucks. A few upgrades can bring it up to par with some of the most expensive gaming laptops on the market, but it will run most games at medium-high graphics even without it.