Today, we are going to talk about Steam Link controllers. Steam is a service that provides a vast library of games for users to download or play online. So back in 2015, the American Video Game giant Valve released a device called Steam Link. It allowed its users to wirelessly stream their steam library on their televisions over Wi-Fi. It was an instant hit among gamers worldwide and it got sold out pretty quickly. Although the production of the hardware box was stopped in November 2018, the software version is still available. The input to Steam Link is given by Steam Link Controllers which very similar to a PS4 or an Xbox controller. We have listed some of the best Steam Link controllers available in the market for you to enjoy your games to the fullest.

Below Are The compatible controllers That work with steam link

First, we look at the official Steam Controller by Valve. This one looks very much similar to an Xbox controller. There is a huge trackpad on the left side of the body disguised as a D-pad and right below them is the analog stick. On the right, there is a similar arrangement except on this side, there are four buttons replacing the analog stick. These buttons are marked X, Y A and B, just like on an Xbox controller. There are also two shoulder trigger buttons provided. In the space left, there is a big power button with the Steam logo on it, surrounded by two directional buttons on either side. The trackpads provide excellent functionality with their on-point accuracy and vibrational feedback which is of immense help as you rarely get the time to check your gamepad in the heat of battle. Although it is highly customizable, its odd design will take some time to get used to. It is also not the most precise controller in existence.

The SteelSeries Stratus Duo is a wireless controller which switches between a Bluetooth and a 2.4 GHz wireless connection on the switch of a button. It has a D-Pad on the right side and on the left, there are four buttons marked X, Y, A and B. Below these are the two analog sticks. The trigger buttons are provided on either shoulder of the controller. It feels sturdy in the hand unlike most third-party controllers available on the market. It does not provide Haptic feedback which is almost an industry standard at this point. The rechargeable Lithium battery is claimed to last 20 hours on a single charge and should be enough for those long gaming sessions. It is compatible with more than 5000+ Steam games and can be used without downloading any external drivers. 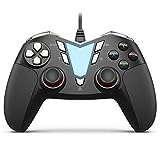 This wired gaming controller has an odd design. Although the button layout is similar to the previous product, the D-Pad and buttons are pushed to the extremes of the body to make room for a channel running through the middle. This channel is lit up by LED. This LED box can either be switched On or Off as per your convenience. Furthermore, when it is On, you get seven colour option- White, Green, Purple, Red, Yellow, Cyan and Blue. The handles have a non-slip rubber on it which makes sure it stays in your hand during intense battles. The vibrational feedback is asymmetrical. This not only eliminates the need to repeatedly look down at your controller but also adds a touch of directional awareness. 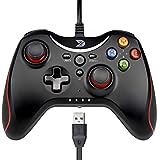 This one is also wired and looks strikingly similar to an Xbox controller. It is a plug-and-play controller, as in it does not require any additional software or drivers to function. The ergonomic shape gives a comfortable grip without any slippage. With its JD switch function, you can easily switch the function of its left analog stick and D-Pad. There is a light indicator provided which can be turned off. It gives full vibrational feedback which comes in handy while playing games which require your full attention to be on the screen. The vibrations can also be switched off. If you face any problems with the device, you can exchange it within three months of purchase by simply writing an email to the company. 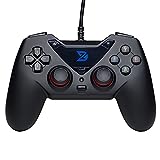 Another product by AD, the ZD-C has a noticeably different layout than the previous one. There is a D-Pad and an ABXY-type pad on the extreme left and right respectively. Below them and towards the interior, there are two analog sticks. The middle region, however, is occupied by a huge arrow-shaped pad with the ZD logo printed on it. It is wired and can be connected using a USB cable which comes attached to it. The ergonomic design makes it fit comfortably in your hand. This one also has a JD function which is similar to the one provided in the ZD T. The vibrational feedback is another handy feature. The company offers excellent after-sales support and is easily contactable through email. 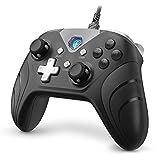 This is the second product by IFYOO in this line-up after the IFYOO One Pro Wired USB gaming controller. Although they are both wired, this one comes with a detachable USB cable which can be stored separately. This cable is 3.2 meters long which comes eliminates the need of sitting very close to the TV which can damage your eyes.It has an analog stick on the left side and a four-button, ABXY setup on the right. Below the analog stick, there is a D-Pad and another analog stick is provided below the Four-button layout. The in middle, towards the top, there is a small depression with the IFYOO logo printed on a small, spherical ball. There are two trigger buttons present on each shoulder. The handles do not slip out of your hand but stay firmly planted in your palms. The functions of the D-Pad and analog stick can be inverted using the JD switch.